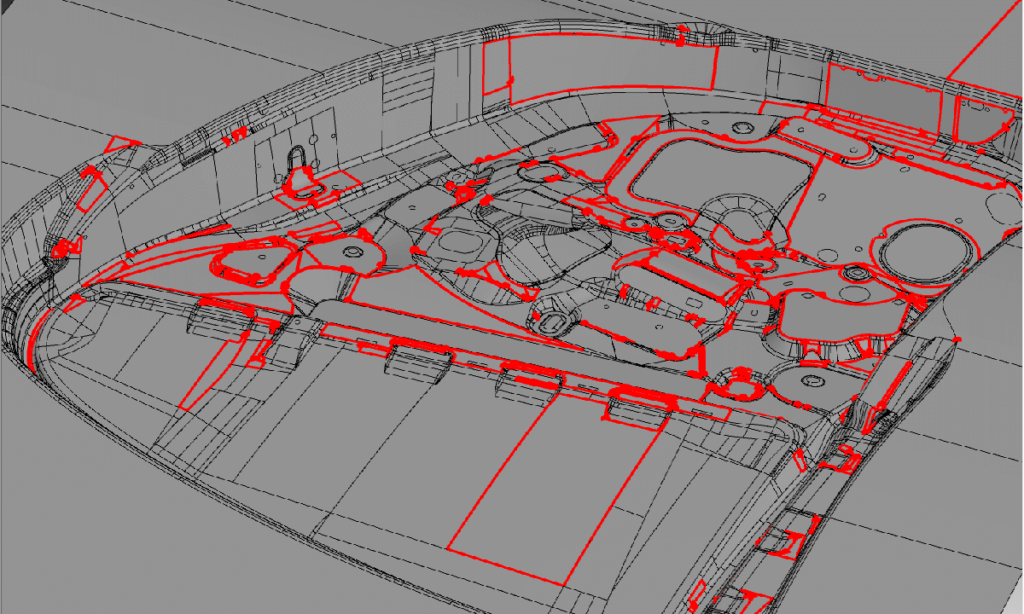 After importing 3D CAD data, the data will not form a solid model and so work cannot even begin…

Frequently, the main cause is the quality of the original data.

With spGate, most of the defects are automatically fixed (healed). The rest of the issues, such as “a loop is intersecting itself ” and “faces have a large gap in between,” are simply pointed out and the optimal healing method is shown.

Unlike many generic CADs with only the bare necessities of healing features, spGate has reinforced the healing features. Allowing high quality data translation and significant reduction in man-hours spent on data correction.

If you receive the third type, face data (data consisting of independent faces), connections between faces need to be created. (This may be called sewing, knitting, joining, merging edges, and so on according to the CAD system.) You cannot create solids or sheets without joining faces, and, as a result, convenient functions like Boolean operations will not be available in CAD systems.

What is joining between faces?

A standard surface consists of “Base Surface,” “Edge,” and “Vertex.”

Let’s see an example of two faces being joined to create a sheet.

To join two surfaces, the edge and vertexes on one side are removed. After removed, the remaining edges and vertexes will share the corresponding face and edge. However, this normally produces a gap between the edge and the face, so that the face needs to be healed.

The IGES format also allows solid data to be defined, but the type of IGES file used by most people consists of independent face group data.

When IGES of independent faces is imported into a CAD system, most of CAD systems will import the data without healing, while some of them have a minimal face healing function (hereinafter called ‘healing’). That is why solids (or sheets) cannot be created.

In that respect, spGate is a system specialized for healing to reduce man-hour required to correct errors.

The healing function is used to correct a variety of data errors. The main errors are as follows.